﻿﻿﻿﻿﻿﻿﻿** SERIOUS SPOILER ALERT **
If you have not read City of Bones, City of Ashes or City of Glass by Cassandra Clare, step away s.l.o.w.l.y. and p.u.t.i.t.d.o.w.n.n.o.w.
Ok... I am a tad late in posting this as the book was released earlier this month but, as the letter is not available in the UK, I think I should. Jace leaves this letter in Clary's room the morning he is going after Valentine. At this point they have fallen for each other but believe they might be related. Meantime, Valentine is about to start a war the Shadowhunters have no chance of winning.
Here it is. Enjoy!
"Clary,
Despite everything, I can't bear the thought of this ring being lost forever, anymore than I can bear the thought of leaving you forever. And though I have no choice about the one, at least I can choose about the other. I'm leaving you our family ring because you have as much right to it as I do.
I'm writing this watching the sun come up. You're asleep, dreams moving behind your restless eyelids. I wish I knew what you were thinking. I wish I could slip into your head and see the world the way you do. I wish I could see myself the way you do. But maybe I don't want to see that. Maybe it would make me feel even more than I already do that I'm perpetuating some kind of Great Lie on you, and I couldn't stand that.
I belong to you. You could do anything you wanted with me and I would let you. You could ask anything of me and I'd break myself trying to make you happy. My heart tells me this is the best and greatest feeling I have ever had. But my mind knows the difference between wanting what you can't have and wanting what you shouldn't want. And I shouldn't want you. 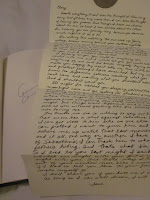 All night I've watched you sleeping, watched te moonlight come and go, casting its shadows accross your face in black and white. I've never seen anything more beautiful. I think of the life we could have had if things were different, a life where this night is not a singular event, separate from everything that's real, but every night. But things aren't different, and I can't look at you without feeling like I've tricked you into loving me.
The truth no one is wlling to say out loud is that no ones has a shot against Valentine but me. I can get close to him like no one else can. I can pretend I want to join him and he'll believe me, up until that last moment where I end it all, one way or another. I have something of Sebastian's; I can track him to where my father's hiding. And that's what I'm going to do. So I lied to you last night. I said I just wanted one night with you. But I want every night with you. And that's why I have to slip out of your window now, like a coward. Because if I had to tell you this to your face, I couldn't make myself go.
I don't blame you if you hate me. I wish you would. As long as I can still dream, I will dream of you.
Jace"