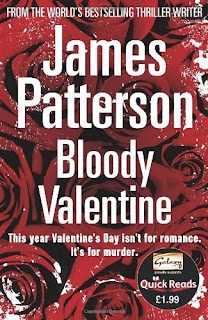 Bloody Valentine is James Patterson's contribution to Quick Reads, a series developed to encourage people to read more by keeping the books short & sweet and language easy to understand. So was it as good as his full sized novels?

SYNOPSIS:
"This year Valentine's Day isn't for romance. It's for murder. Mega rich restaurant owner Jack Barnes and his second wife Zee are very much in love. However, their plans for Valentine's Day are about to be torn apart by the most violent murder. Who is the strange figure plotting this sick crime? Who hates Jack that much? There are plenty of suspects living in Jack's fancy block of flats. Is it them, or could it be the work of an outsider with a twisted mind? One thing's for sure, the police have got their work cut out solving this bloody mess." (Goodreads)


REVIEW:
What I love about a good short story is that you get thrown straight into the action. There is no time wasted in long-winded character introductions or detailed description of places as they are not really relevant. In Bloody Valentine, by page thirty the murder will have been so crimson your stomach will turn and there will be so many suspects you will not know where to look first. Patterson also gives just enough detail so that you are angry at the murderer's cruelty and wants him/her caught.

The only fault I can pin point in any Patterson novel I have read, independent of its size, is that he works to a formula. I know, I know! It is a little hard not to have a formula on a "whodunit" novel, but Patterson tends to stick to the same details: a wealthy group of people, a working class detective, a relationship based on lust for money, a relationship based on love, deception, sex, etc, etc... After awhile, all his books start sounding the same.

Having said that, I cannot ignore the fact the man is a genius at rubbing the killer right under your nose throughout the story and at the end you are still surprised it is who it is. He always manages to make their innocence so believable that you do not even consider them as a suspect until the one detail you have not thought about becomes the missing piece right at the very end. Then you have the whole unveiling of the culprit in front of everyone. The End.

In this case, this is literally what happened and I was left a little a lost to how fast the confession came from the murderer's lips, if you bear in mind this is someone who plotted such a cruel and detailed crime. You would think they would at least try to talk their way out of if! That seems to be the shortcoming of short stories, tough: a climax that lasts shorter than your Pot Noodle warm up in the microwave. Apart from that, I really enjoyed this thriller and if you are a murder mystery lover, you will love this one.

OUT OF CURIOSITY: To read another Quick Reads review (Trouble on the Heath by Terry Jones) click here.