Cover Release for Waiting For Gonzo by Dave Cousins 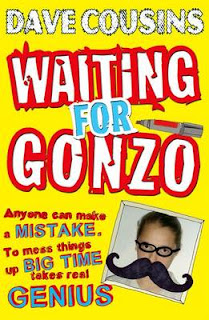 The cover for Dave Cousins new novel, Waiting for Gonzo, has been released!

Cousins is one of the Edge authors, a group of writers who have made it their mission to tackle and raise awareness for the issues faced by young people today. In his first novel, 15 Days Without a Head (read my review here), we met Lawrence whose mother is a depressive alcoholic. Although the story is incredibly sad, Dave's sense of humour manages to make you smile through a heart breaking tale. In Waiting for Gonzo we will meet Oz - with problems of his own and a sister who might just be too young to be a mother.

I can't wait to read this book. It was on its final draft stage when I spend a spell with the folks at OUP last month and it's interesting to see the finished cover from the design meeting I was able to sit in. If Dave Cousins works his magic like he did in 15 Days Without a Head, I have no doubt Waiting for Gonzo will make it to my 2013 favourite reads list.

Waiting for Gonzo is already available for pre-order (click here to order it) and it releases on March 2013. Keep an eye on us as we will do the countdown to the release with teasers, an interview with Dave and more!

SYNOPSIS:
"Meet Oz ...he's got a talent for trouble but his heart's always in the right place (well, nearly always). Uprooted from his friends and former life, Oz finds himself stranded in the sleepy village of Slowleigh. When a joke backfires on the first day at his new school, Oz attracts the attention of Isobel Skinner, the school psycho - but that's just the beginning. After causing an accident that puts his mum in hospital, Oz isn't exactly popular at home either. His older sister's no help, but then she's got a problem of her own ...one that's growing bigger by the day. Oz knows he's got to put things right, but life isn't that simple, especially when the only people still talking to you are a hobbit-obsessed kid and a voice in your own head! Packed with action, heart and humour, Waiting for Gonzo takes you for a white-knuckle ride on the Wheel of Destiny as it careers out of control down the Hillside of Inevitability. The question is, do you go down laughing? Or grit your teeth and jump off?" (Watersones)