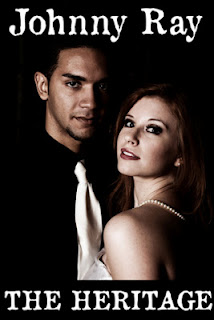 Scandal, money, power, and a baby. This book sounded promising from the word go.

SYNOPSIS:
"This story is based in New York City where socialite Kristina learns she’s pregnant, but how? She couldn’t remember sleeping with anyone for a long time. Her only explanation—a date rape drug. And now, someone wants her to have an abortion or die before giving birth. Her bodyguard, Shawn Davis, offers her the best chance in surviving and discovering the truth. But Shawn is keeping his own secrets."

REVIEW:
The Heritage is a fast moving, nail biting novel.

The characters are well defined and interesting. The writing flows nicely with very few hiccups and the story has two climaxes, which is great.

However, there was something I just couldn’t quite nail. In particular, during some of the dialogues and sex scenes.  I don’t know if that was because it is a fast paced, short novel, but some of the characters’ interactions, especially in between the two protagonists, just seemed a tad off. The conversations taking a tone that didn’t flow or sound very natural.

The confession at the end also left me a little lost. It came almost too easy, the reason and the way it happened sounding a little unconvincing. Up to them the whole mystery had kept me on my toes and seriously engaged.

Having said all this, the plot is very, very interesting. And the way the mystery unravels and things are put together will have you on your toes all the way. For that alone The Heritage deserves its stars.

A book for anyone into fast moving drama with a big pinch of romance. Buy the eBook here.