A plotted assassination, an elite team trying to protect its target and, in the center of it all, a writer preaching freedom and understanding in a culture full of violence. 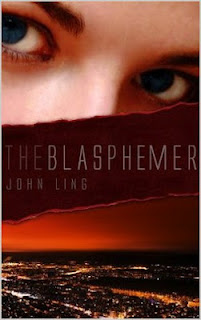 SYNOPSIS:
"When Abraham Khan releases an e-book condemning radical Islam, the consequences hit him fast and hard -- an armed fanatic smashes into his home one evening, trying to kill him. He survives the harrowing attempt. Just barely. But will he survive the next one?

Maya Raines is the security operator brought in to protect Abraham. She is tough and committed. The very best at what she does. Always one step ahead of the threat.

But Abraham is no ordinary principal -- he will not hide, and he will not stay silent. And as rage explodes on the streets and the nation is propelled to the brink, Maya will have to ask herself the hardest question of all: how far would you go to protect one man’s right to speak?" (Goodreads)

REVIEW:
The Blasphemer by John Ling is a little different from the action thrillers I’ve read in the past: one - it has no romance storyline, even though there are couples clearly involved; and two - the main story is based on current issues rather than being mostly fictional.

I have to admit I was a little weary of this book before reading it. Anything involving the words Muslim and bombing in the same sentence makes me a little suspicious. I wondered if Ling would play the stereotype card to its heaviest.  Granted, he has used a touchy and polemic issue, but he has also done it well.

I’m not the brightest cookie when it comes to understanding Islamic cultures and this book did something quite interesting – it taught me a lot about it. There was some research gone into writing this novel (you can read a couple of Ling’s essays at the end of the eBook) and, without spoiling the plot, John gives you insight into all the issues he has researched. The Blasphemer ends up not only being intriguing and entertaining, but also informative. Something I don’t say about fiction books very often.

Not only that, but it’s informative without being judgemental. These days it’s not uncommon to find books portraying Muslims as extremists with a tendency to terrorism. While John Ling admits that there is a group that fits that criteria and mentions them in his book, he also throws into the pan the people who use tender issues, such as religion, to manipulate situations and trigger conflicts that will benefit a group not at all connected to the issue itself. He also highlights that there are Muslims out there that are not extremists and do not have a tendency to violence.

The Blasphemer is action packed from cover to cover and the action is very well delivered. As a matter of fact, so well delivered it made me wonder if Ling had not been a secret agent in his past life. The plot is believable and the characters very easy to follow, even though there are many of them and some are only in the story for a very short period of time.  Yet, not one of them is dismissible or dispensable.

The writing is smooth and easy even though the subject can sometimes be very specify and all-in-one, it’s a great action thriller. One anyone into action novels, especially blokes, will enjoy.

For more information about John Ling and his novels please visit his website by clicking here.