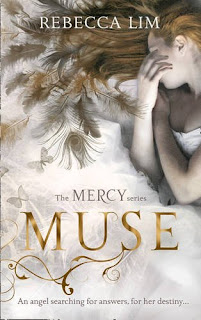 Muse (published by Harper Collins) is the third book in Rebecca Lim's Mercy series. Question is: when it's preceded by two fantastic books, does it step up to the mark?

"An angel becomes a muse... Mercy, an exiled angel doomed to return repeatedly to Earth, is thrust into the body of troubled supermodel Irina.

Against the glamorous background of Milan, Mercy continues her increasingly desperate search for Ryan, the mortal boy she fell in love with, yet is still drawn to Luc, her eternal flame. But as Mercy's memories and powers grow ever stronger, she begins to doubt Luc's desires and his purpose.

The celestial battle for Mercy's soul builds to a stormy crescendo in Muse, the third book in the spellbinding Mercy series". (Backcover copy)

I love this series! And I couldn't wait to read this book. Rebecca Lim is the queen of cliffhangers, so after I finished Exile - tear-stricken and angry (read my review here) - I was counting the minutes to read Muse. It has become a little bit of an addiction. However, I have to admit that I'm not sure it hit the spot.

Muse is seriously fast paced as Mercy is not allowed to "souljack" the same body for very long and the plot becomes more and more complicated as she unravels more about her own past. But unlike the first two books in this series, I just couldn't get that emotionally attached to this one.

Writing wise, there are a few repetitions and quite a few pages at the beginning are just recapping the story. I know you have to do it at some stage, but there is no reason why it couldn't be seamless, like it was in the second book. I can't tell you how surprised I am to be saying this of Rebecca Lim. I have never been able to say anything else about her writing rather than 'I love her books'.

The characters are likeable, especially Gia - Irina's assistant who becomes Mercy's biggest ally. In contrast, I'm not sure I found the love triangle that convincing. Mercy's feelings for Ryan seem to be very sporadic, only appearing whenever she remembers him. There was just something that was not quite right when you compare this novel to the other two, and I just can't put my finger on it. It's very annoying.

Having said all this, Lim does something I really like: she portrays the fashion world as shallow, self-obsessed, tantrum and ego driven. Bottom line? Just damn ugly. Because you know what? That's exactly what it's like. I know because I worked in it for a few years. It's not all that it's cracked up to be. And neither is the life of being a celebrity - again, just like Rebecca portrays it. That spin, going against the grain of what you would normally read about fashion and being famous, is very much Rebecca.

While it didn't hit the mark, I can't say it was a total disappointment. Lim's wit is still as entertaining as ever. Not to mention that in anything longer than a trilogy there is always one novel that seems to be signing from a different hymn sheet - in Twilight it was Eclipse; in Wicked Lovely it was Darkest Mercy; and in The Mortal Instruments I'm not sure the second batch of books follows the same original and brilliant principle either. That doesn't make me like them any less.

I would love to say more and explain myself better, but I can't do it without spoiling the book if you haven't read it yet. And that is a rule I'm not willing to break. Verdict? Not as good as the first two, but a good read nonetheless. 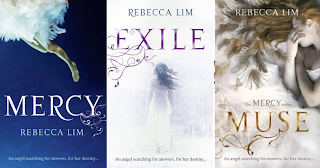 OUT OF CURIOSITY: You can read all the articles I've written about Rebecca Lim and her books here.