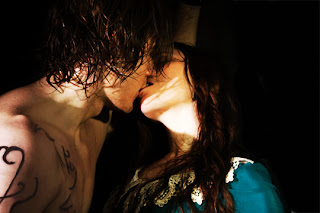 For months Cassandra Clare has given little snippets of her upcoming book City of Fallen Angels and today she released the video footage of the scene that was apparently too hot to make it to the trailer!

It all started when Cassandra posted as a teaser the scene where Jace and Clary have a good old-fashion snog in an alleyway. The teaser was then hailed the infamous "DSAS" and the rest is history. The only way to watch the video was to follow the DSAS Hunt and them unscramble the letters given in each blog to use it as a password. It took me ages to figure it out! It was WAYLAND. *Duh! Bangs hand on forehead* Anyway... Moving on...

During the hunt you also came across the blog of a new character from the upcoming book: Maureen Brown. It is filled with interesting comments and photos. Once you start cooling down and you can concentrate, take a further look!

If you are curious to know what the fuzz is all about... Here is the teaser from City of Fallen Angels that generated all the noise:

"The alley and the music all fell away, and there was nothing but her and the rain and Jace, his hands on her. . . He made a noise of surprise, low in his throat, and dug his fingers into the thin fabric of her tights. Not unexpectedly, they ripped, and his wet fingers were suddenly on the bare skin of her legs. Not to be outdone, Clary slid her hands under the hem of his soaked shirt, and let her fingers explore what was underneath: the tight, hot skin over his ribs, the ridges of his abdomen, the scars on his back. This was uncharted territory for her, but it seemed to be driving him crazy: he was moaning softly against her mouth, kissing her harder and harder, as if it would never be enough, not quite enough —"
Yeap! Lady Clare does know how to keep us all coming back for more! When asked on Twitter if she was surprised her fans asked about hot scenes in between the characters Cassandra answered: "Nah! I know my fans have their mind in the gutter.:-)"  With scenes like these, don't we all?


Now here is the famous video: P.S. You might need a cold shower after this...