Out & About - Carlitos in Clitheroe 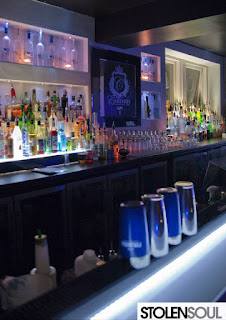 Clitheroe is a small market town in the middle of the Ribble Valley, but Carlitos is the kind of bar/nightclub you would find in  cities such as Manchester.

Having Latin blood coursing through your veins means that at some stage one will want to dance until one drops. Yeap, guilty as charged. I'm a big fan of a good night out with friends and wiggling the old bones away, but I love doing it in style. I go for yummy cocktails, descent music, people who make an effort, and no hassle. In short, I like a vibrant atmosphere and, although I can and would do a good job of it too, I'm not really keen on lowering the standards by having to climb off my heels or take off my hoops to set some drunk argumentative stranger straight.


When I moved to Clitheroe a few years ago *coughs - almost a decade* there were only two good restaurants in town and the only real option for an evening out were pubs. Don't get me wrong, I like pubs and I think they have their place. But they are not nightclubs by definition. They don't usually serve cocktails and people don't usually dress up to go down for one. So it's a different ball game all together, and for years I have driven up and down motorways to party in bigger places.

Well... That was until Carlitos opened and I realised just how dangerous it is to have a descent nightclub on your doorstep. ^_^ And gosh, does it tick my boxes! Quirky decor, dangerous liquid candy, charming people and the kind of music I could dance to all night. Tick, tick, tick.

Now Carlitos has even managed to bring big party nights over to a small market town. And trust me, as an ex-events organizer, I know just how difficult it is to convince a well known DJ that a town in the middle of the countryside might just be where he/she wants to be. Last weekend they even hosted a GQ party. That's a big glossy magazine, if you never heard of it.

Ok, so it's not cheap. But honestly, I don't really care. As a mother, I don't get to go out that often. *Feels husband gives the evils all the way from his business trip across the pond* Right, right, ok. I'll correct it: not as often as I used to, so... When I do go out I want it to be a guaranteed good time with no drama. That's why I don't mind paying more. I also have London standards for going out, as there was where I used to play when I was younger, so one could say I do have grandeur problems when it comes to venues. :-)

Things to watch for are: they do have a dressing code policy, so dress to impress if you want to get in;  they have started restricting large groups of lads going in without female counterparts, so boys... bring some arm candy with you; and since it's a nightclub, it doesn't really get going till about midnight. So if you pop in at 11pm and it's not buzzing, it's because it hasn't started yet.

As you might have noticed, I'm a little bias when talking about this place. I do love it there. So if you are in Clitheroe, up for a good night out and, like me, you enjoy doing it with some panache... Carlitos is the place you want to be.

Labels: Bars and Restaurants, Clitheroe, Lancashire, Nightclubs, Out and About