Book-Turned-Movie Review ~ The Lucky One 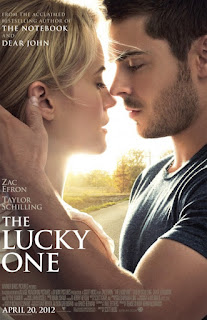 The Lucky One is the film adaptation of a Nicholas Spark's novel by the same name. It didn't receive praising review from the film critics, but I had to go and see it for myself.

It tells the story of Logan, an US Marine, saved from dying after he finds the photo of an American woman amongst the debris of a war zone. On his return, he vows to find the girl and thank her as he believes his life should have been lost together with a few of his friends had he not found her photo. Needless to say, he does find her.

Regardless of what the critics say, I really enjoyed The Lucky One. Ditto, it was a little rushed at times, almost as if they tried to fit too much in, but I liked it nonetheless.

The acting was good, the sound track relevant and the story quite moving. Although, I have to admit it was a tad strange looking at Zac Efron on his black underpants and enjoying the view. My daughter watches films with him in it, for crying out loud!! It was like having the angel and the devil on your shoulder - good but sooo wrong in so many levels. All I can say is this: he has g-r-o-w-n up. A LOT.

Moving on... There are parts in this movie I found a little inconsistent. Per example, why does the husband doesn't swim back across the river? He did it once. Logan does it twice. * A head scratching moment, please!* Then again, as it always happens with books-turned-movie, you always have the feeling the movie should have been longer to explain the plot properly.

Having said that, that's why you have the book! So I'm going to go and read it now. I want to know the details. ^_^

Mental note: Sometimes I let my 10-year-old watch certificate 12 films such as The Avengers and Pirates of the Caribbean; however, while The Lucky One is a certificate 12A, there are quite a few sex scenes in it. So really not appropriate for children.