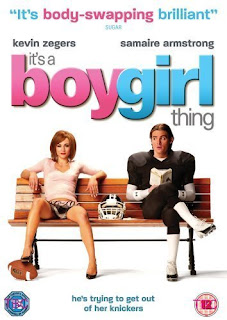 What happens when you are up till late and the TV is on as background noise? You end up watching a film you wouldn't normally choose to watch. And, sometimes, you find something interesting.
That is exactly what happened with "It's a Boy Girl Thing". I am usually not a big fan of silly, sex filled comedies like "American Pie" and "The 40-Year-Old Virgin". So you can imagine what the appeal of "He is trying to get out of her pants" was. None. But, surprisingly, I really enjoyed this movie.
Plot wise: sworn enemies at school and neighbours Nell and Woody are complete opposites. He is the boy tart, vain, rude football team star and she is the smart, school's self proclaimed virgin with her eyes set on going to Yale. Unfortunately for them, after a school trip to a museum showcasing the statue of an Aztec god known to have mystical powers, they end up swapping bodies. He wakes up as her and she as him.
Granted. That might not be very interesting. What is interesting, however, is the fact that while in each other's bodies they discover they are not that different. Yet, to get to this point they have to go through using each other's "shell" to annoy the hell out of one another, which makes for hilarious situations and scenes. Nell, in Woody's body, breaks up with his girlfriend, dresses him like a "nerd" and cries in public, potentially ruining his "cool". And Woody, in Nell's body, attends girl's pajama and pampering parties for his own benefit, dresses like a "slut" and threatens to "pop" Nell's virginity. However, things change when he realizes how upset she is over the rumors that she, or rather, her body has slept with someone random. It also becomes clear that to achieve their goals of going to college they must help each other perform well on their college interviews. Obviously, along the ways they also manage to fall for one another.
Credentials: This is a not you star packed movie and, like me, you might not have seen this pair of actors in anything you would remember, but I think they've done a good job. Both played being from the other sex very well and even Sharon Osbourne, which I have never seen in a movie before, did well in her role as Woody's mother.
My only criticism is that the end doesn't quite feel as it should. And I get the point that they have both changed with the experience, but they are not quite themselves either. Woody per example seems to lose all his "alpha maleness". I got the feeling that they have filmed this feature in chronological order to the story, while the end and the beginning should perhaps have been filmed together so that, while the character's attitude and mindset changed, their natural behavior remained true to their original selves. But that is just me and my opinion.
QUICK NOTE: With some Cert: 12 movies you can take the risk of allowing children to watch. While this looks innocent enough, it is NOT one of them. Even though there are no actual sex scenes, the mention and suggestion of it are so obvious and blunt they might as well have added one in. Maybe this should have been rated as a Cert: 15 or maybe I'm too much of a prude.
Film Rating: ****
To check the rating system click here.