Mauricio was originally a crime reporter for Brazilian newspaper "Folha da Manhã”, but in 1959 he asked his editor to print one of his comic strips and the rest was history. Today his children comics are just about everywhere in Brazil and they are a brand on their own.
Today, Mauricio's comics include a range of characters separated into a series of different groups or gangs and Mônica's is just one of them. It just so happened that her gang was the one I loved the most when I was learning to read.
The main character was based on Mauricio's daughter, Mônica, a strong minded, feisty yet cute and sweet little girl who would not take things lying down. The cartoon version of Mônica lives with her parents (obviously), has a dog called Monicão and her most prized possession is a cuddly blue rabbit that is a source of comfort as well as a weapon to put anyone bothering her in their place. Magali (a little girl that not only loves to eat, but eats like a trooper and who's favourite food is slices of watermelon), Cebolinha (a boy with weirdly spiky hair and a speech impediment that makes him swap all "Rs" for "Ls") and Cascão (a boy that runs from water like the devil runs from the cross and has never had a shower) are all her friends and part of the gang.

The stories are about kids' stuff: the endless war in between boys and girls, Cebolinha constantly trying to steal Mônica 's rabbit only to fail and get smacked by her with the same rabbit, the whole crew ganging up to try give Cascão a shower... But in the end it is about friendship. How this four very different kids love each other's company and how, no matter what the situation is or what happens, they are still friends. It is about how everyone has a little quirk, but these quirks do not make any of us any less lovable. So while being good fun, Mauricio's comics are also educational. There is even a new series, Turma da Mônica Jovem (Monica's Teen Gang), portraying the gang a little older and tackling teen issues. 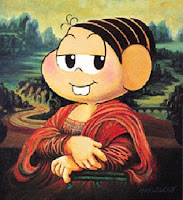 Needless to say, I had a lot in common with Mônica - the weird looking girl, with funny teeth and an attitude to guard her sensitive soul - and now my daughter also reads the comics. I don't know about you, but I find this quite beautiful and it is a credit to Mauricio and his team. It is has to be amazing, as an author, to see your work pass from one generations to the next.
You can now also buy these comics in English, Spanish, Italian and Indonesian. If you don't have children of you own, borrow a nice, nephew or neighbours kids (just don't kidnap anyone) to have an excuse to read them. It will be worth it.

For more information please visit: http://www.turmadamonica.com.br/ingles/index.htm
Recap of our Brazilian week:
On Monday we listened to some music. On Tuesday we talked about beauty and Brazilian Waxing (ouch!), yesterday we sampled some yummy food and today we had a look at Children Books. Tomorrow I will talk about the best books I read while living in Brazil.