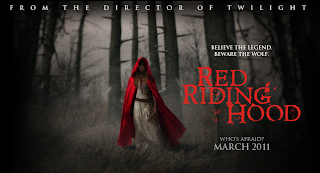 One movie I'm looking forward to watching this year is "Red Riding Hood" (2011) which releases in the UK in April. With the main role filled by Mamma Mia! star Amanda Seyfried, directed by Catherine Hardwicke and produced by Leonardo De Caprio this movie is sure to be an attention grabber. More than anything I just want to see the fairytale coming to life in an adult way, since most movie producers tend to tone down the dark side of them in order to present them to children. Who said only the little ones want to watch them?


Catherine Hardwicke made her name by directing the first instalment of the Twilight saga. It generated a lot of controversy with fans of the books but, for what was then a low budget movie, I think she did well. I really enjoy how she sets the mood with colours and Red Riding Hood seems to be following the same pattern. What I like the most about Twilight in particular is the soundtrack and its mixture of classical and rock music. Whatever you say about Hardwicke, that girl does know how to pick a good song and for Red Riding Hood she has brought in Fever Ray. I'm most definitely looking forward to hearing the song they have written as a soundtrack for this flick.

For a taste of Fever Ray's sound try this: