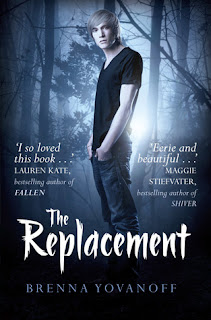 For her first novel, I think Yovanoff has done a great job.

SYNOPSIS:
The cover is lovely, even though I prefer the American version - I'm not sure about the Justin Bieber hairdo on the British one. Moving on... The plot is very interesting: in the little town of Gentry human babies are being replaced by some other creature's offspring and Mackie, a 17 years-old boy, is one of the replacements. They usually die young, not quite adapting to the human world, but against the odds he survives through to his teens. Far from being a good thing, this only means he has to face up to what he is when all he wants to do is to just fit in. As a matter of fact, if he's to survive any longer he has to. To make matters worse, Tate's sister has being taken and he's the only one that can help her before it's too late.

REVIEW:
Writen from Mackie's point of view, not a girl's, this was a nice change from the latest books I've read and, for me, Yovanoff managed to pull off the workings of a male mind. There is nothing worse than a female writer pretending to be a bloke that acts like a girl, unless that it's intentional of course. The characters are well developed and the plot is enticing. The story is actually so engrossing that although Yovanoff doesn't really explain anything in detail (is he a fairy, is he a demon, is he an alien?) you don't really care. All you want to know is if he and Tate will get it together and if he'll manage to rescue her sister. Tate is also far from being the damsel in distress. Or... you could call her that if your idea of a damsel is a kick arse lady: "Instead, she smiled... The smile that said, I have fun when I break stuff... He didn't know that the surest way to piss her off was to draw blood."  If Mackie is part of the fey folk, Yovanoff introduces faeries from an angle I've never heard before. This book can also be quite gory at times, so walk away slowly if you don't like bloody scenes.

All in one The Replacement is an easy, mysterious, action packed good read. I really enjoyed it, would recommend it and read it again.