Out & About – The Blackpool Tower Dungeon

I am usually one of the most skeptical people. So why did I scream more than my nine year-old during our visit to The Blackpool Tower Dungeon?
The Dungeons are a popular attractions not only in the UK, but also in Europe. I had some tickets so I decided to take my nine year-old daughter, who has developed a fascination for blood and hospitals, and her friend, who loves scary stuff. I went in expecting a Halloween replay - fake blood and dead looking dummies galore - but what I got was a very interesting history lesson.

A little bit like the children’s TV programme Horrible Histories, The Dungeons use local history to fuel their stories and attraction. The one at Blackpool Tower educated me about the arrival of the Plague in Lancashire, the type of medicine used at the time (a miracle anyone survived the doctor, leave alone the Plague!), methods of torture used during the war to obtain information (no wonder everyone confessed to everything), the Viking invasion, the smuggling trade in the Fylde ports, and finally the famous witch hunt and hangings that took place at Pendle Hill and Lancaster Castle.  I feel slightly uncomfortable now, every time I look over Pendle Hill from my window. :-?
Basically, you are part of the story. You survive the Plague (and the doctor examination) to then get through a Viking invasion, torture and eventually be judged and found guilty of witchcraft, for which crime you are hanged. Your hanging being a ride that lifts you up in the air then drops you back towards the floor. I think my stomach is still floating above my head. 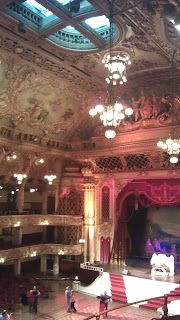 You are guided along by a team of actors that introduce you to a little of the history as well as that particular part of the attraction. And let me tell you... There was plenty of screaming going on and it wasn't just me.
We had a great time! The girls thought it was brilliant and they even recognised some aspect from what they have seen at school. There was also a lot adult humour in between the lines so there were plenty of giggles as well as screams.
On the small print, The Blackpool Tower Dungeons is a family attraction recommended for children aged 8 and above (read more about it here), but if you child is seriously afraid of the dark, as you can guess, this might not really be suitable. By seriously afraid I mean if they really panic. My daughter doesn't really like the dark, but as long as she had my hand she was fine.

While there is plenty of things to make you squirm, there is nothing really vomit worthy. However, if your child is very easily impressed and has the tendency to have nightmares, I would avoid the surgeons chamber. 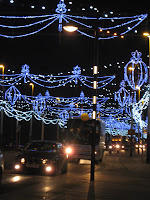 If you are coming to Blackpool all together, bring a coat with pockets. As it's a seaside town, the wind can feel very cold. If you are driving, bring some change as most of the car parks, certainly the ones closest to The Dungeon, are pay and display. Five pounds worth of coins should be enough to buy you a few hours.
The Dungeon is only open from 10am to 4pm so once you come out, do wonder around and pop into the arcades or piers for a little more fun. I would recommend you give the kids a set amount of money to spend, though. Otherwise the arcades will bleed you dry. :-)
Once the sky goes dark, and depending of the time of the year, do watch out for the Illuminations on the Promenade. They are quite something. Also, if you can, sneak up to the fifth floor of the tower (where the burger bar and toilets are) and have a quick look inside the actual Ballroom. It's breath taking. Don't miss the very interesting pictures on the wall behind the balcony, which show years of the theatre's history. Fascinating. My favourites were the photos of the RAF parties during World War II.
Don't wonder around till too late if you have children, though. Blackpool is still known for having a busy drinking and nightlife culture and everyone out to play crawls out of the wood works around 10pm.
All in one, this was a fab day out with the kids and we all enjoyed every minute of it. The only one that had nightmares about it was me! Funnily enough. *_*

Labels: Attractions, Blackpool, Family Friendly, Out and About, Places to Visit, The Blackpool Tower Dungeon