Firelight is the book with 'that cover'. Yeap! The one that just makes you pick it up and take it straight to the till. The million dollar question is: do the words inside it have the same effect? 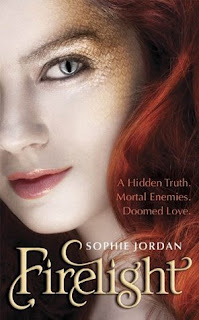 Marked as special at an early age, Jacinda knows her every move is watched. But she longs for freedom to make her own choices. When she breaks the most sacred tenet among her kind, she nearly pays with her life. Until a beautiful stranger saves her. A stranger who was sent to hunt those like her. For Jacinda is a draki—a descendant of dragons whose greatest defense is her secret ability to shift into human form.
Forced to flee into the mortal world with her family, Jacinda struggles to adapt to her new surroundings. The only bright light is Will. Gorgeous, elusive Will who stirs her inner draki to life. Although she is irresistibly drawn to him, Jacinda knows Will's dark secret: He and his family are hunters. She should avoid him at all costs. But her inner draki is slowly slipping away—if it dies she will be left as a human forever. She'll do anything to prevent that. Even if it means getting closer to her most dangerous enemy. (Goodreads)
REVIEW
Firelight (published by OUP) had me hooked within the first few pages. I was so engrossed in the story that, before I realised, I had read through the first five chapters. Hell! I wanted the book just because the cover made me curious.
But now I find myself borderlining on my opinion of it. While Jordan's writing is very captivating and she manages to make you feel like you are right in the middle of the action without overwriting the scene, I walked away from Firelight feeling that she had this amazing plot... But then decided to go about it in a really strange way. *scratches head*


Ok. I know what you're thinking: 'this is a story about dragons that turn into humans, for crying out loud! How on earth could it not be strange?' See... It's all in the little details for me. There is fiction. And then there is fiction that makes you believe it could be real. Firelight is the former. The frustrating thing is that the plot concept is good enough to be the latter, but the way the story is delivered just made me feel like something was missing.
I just couldn't make sense of certain scenes. None of the characters managed to elicit my sympathy - Jacinda's inner chatter becomes so repetitive halfway through the book that you end up not really caring; and all the characters are so selfish that the small demonstrations of affection are not strong enough to make you believe it. The book's time scale also went straight over my head. It kind of made me think of another book I reviewed - Nightshade (read it here).

Don't even get me started on how often you read the name 'Jacinda'! I can only guess Jordan really likes the sound of if or that she repeats it so much for some other reason. Surely someone close to the girl would have given her a nickname, no?
Regardless of all that, I did enjoy reading it. Why? Two words: THE PLOT. I am a sucker for good drama and at the end of Firelight another secret comes to light. Major cliffhanger! I needed to know how that came to be and was instantly trying to find reviews of the second book, Vanish, to satiate my curiosity. Unfortunately, I will have to wait until September 2012 to find out. :-?
So there. That was Firelight for me. Did you read it? If so, did you like it? Please do click below and leave your comments. I would love to hear more opinions on this one.
Book Rating: ***
To check the rating system click here.