Every so often I read a book that surprises me. This was definitely one of them. 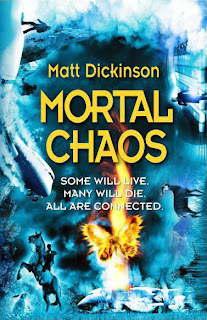 SYNOPSIS
'Butterfly effect: The scientific theory that a single occurrence, no matter how small, can change the course of the universe forever. Jamie and Will, bunking off school to go hunting. Kuni, trapped in an icy crevasse. Shelton, on a deadly mission for revenge. Bakili, under attack from bloodthirsty baboons. Tina, piloting flight 492 to Moscow. For them, and many others, things will never be the same again. Some will live. Many will die. All are connected. A heart-stopping adventure that will leave readers breathless.' (Waterstones)

REVIEW
Mortal Chaos (published by OUP) is Matt Dickinson's first YA novel, but you might have heard of him before as he has written a series of other adult orientated adventure novels.
I was lucky enough to have been given an early ARC copy during the OUP Bloggers Event earlier this year, but I have to admit that at first glance I didn't think I would enjoy it. There were too many characters in a series of stories that didn't seem connected at all. Then Dickinson worked his magic. Slowly but surely all the stories started to interconnect, like a spider web, leading to an explosive end. Literally.
His prose is brilliant. Smooth, simple and straight forward. I found it amazing how he gives very little physical descriptions of any of the characters, yet you have a perfect picture in your mind of how they look like and where they live. He also tells the story by using short chapters that flip back and forth in between the characters, so if you want to follow one particular storyline you can. However, because they all cross over eventually, you're not able to figure out the end without reading the whole book. Again, very clever.
While there are a lot of characters and at first it all seems a little overwhelming, you eventually zoom into the stories that touch you the most. There are also several tension points which will have you biting your nails down to the quick.
I loved how I read through it knowing that something was coming, but was still taken by surprise at the end. Unfortunately, this was also where Mortal Chaos lost its final fifth star for me - the ending was just a little too unrealistic. I can see what Dickinson was trying to do: he wanted to start and finish with the butterfly, but you could rip the last chapter off completely and it wouldn't make any difference.
All in one, a brilliant read. I would most certainly recommend it to anyone - adults or teens - and especially the boys.
Mortal Chaos releases on February 2nd 2012.
Book Rating: ****
To check the rating system click here.