Tension, heartbreak, a new hottie... So is Settling, the second book in the Solid series, better than the first? (read my review of the first book, Solid, here) 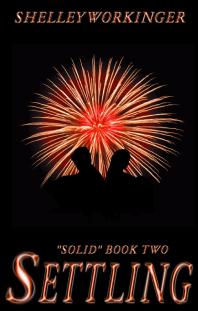 SYNOPSIS
At the beginning of the summer, Clio Kaid was one of a hundred teens brought to a secret Army installation. But it was no ordinary camp and they weren’t ordinary kids… Picking up where “Solid” left off, Clio and her friends realize that they aren’t ready to go home; they’re determined to stay on campus and continue their journey of self- discovery. But someone doesn’t feel the same way and will do anything to drive them away – even kill. Friendships will be tested, abilities will evolve, and more secrets will come out as the teens race to stop the killer before he sets his sights on one of them.  (Goodreads)


REVIEW
In Settling you see the return of all the characters you felt in love with in Solid, plus some new ones. There is action, crisis, betrayal, scenes that will make you cry and a super kissing scene (read the excerpt here - trust me, out of context the excerpt doesn't do it justice. When it happens within the story, even though you already read it, you will be sitting at the edge of your seat).
The villain and the plot are a lot more convincing and consistent. Unlike the first book, the end of Settling gives anything but closure, which makes you not only expect a third book but also want it.  In short, Workinger has definitely stepped up a gear with this one.
It also introduces you to a different side of each character; to the point that the ones you didn't like in Solid become your favourites in Settling. Not to mention the newbies, including a love triangle. I actually feel quite guilty for not being loyal to the good guy. The new hottie definitely rocked my boat.
The story starts really slow, introducing a lot of the characters again and although this is great for anyone who picks Settling before reading Solid,  if you know what happened already, it slows everything right down. The actual plot doesn't really get going until you are almost half way through the book. But once it does... You can't put it down.
A little like New Moon in the Twilight Saga, Settling is where crap hits the fan. So there is a lot of inner chatter and trivial things going on that only become relevant later in the book. Clio, our heroine, is also largely responsible for all the misshaps. At times you will want to have by the throat, slap her, shake her and ask: "what the hell are you doing?"
The result? Even though it took me awhile to get into it and Clio annoyed me immensely with her stupidity, by the end I was genuinely sorry for the girl and can't wait to find out what happens next.  Sound, the third book of the series, is due for release summer next year (2013).
OUT OF CURIOSITY: Keep your eyes open for all the music quoted in this book. There are some awesome recommendations for songs and artists!


For more information about the books check the series website by clicking here. If you're feeling chatty, you can check Shelley Workinger’s blog by clicking here or get in touch with her via Twitter: @SWorkinger or over at Facebook.
Book Rating: ****
To check the rating system click here.