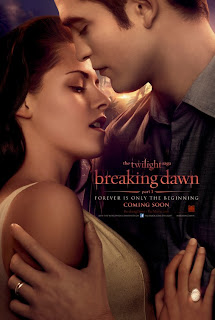 Breaking Dawn as a book sparked a lot of controversy. With words such as "alluding to rough sex" and "too graphic scenes" been thrown in the pot, how can you make a movie adaptation and keep it a certificate 12A?


If you haven't watched the other movies or read the books, you need to catch up. So here it goes in F1 speed: (If you have, skip the next few lines)


* Film & Book 1 (Twilight) ~ Bella falls in love with Edward and discovers he's a vampire. The price to be with him might be her life.


* Film & Book 2 (New Moon) ~ In love with Bella and desperate to keep her safe, Edward leaves her. But that doesn't do any of them any good and her life continues in danger.


* Film & Book 3 (Eclipse) ~ Edward is back, but while he was away, Bella became close to Jake, who has secrets of his own and will not give her up so easily. Not to mention that the villain from the first film is back for revenge.


* Finally, in film & book 4 (Breaking Dawn) ~ Bella marries Edward. She wants a real marriage, but that is not quite that straight forward when your husband is a vampire and all sort of problems start to unfold. All of which could lead to her death.

First things first... Why are they making two movies out of one book? Simples! *squeaks like the meerkat on the TV advert* Have a quick glimpse at the 756 pages of the book and the reason will become very clear. There is basically too much going on to make it fit into just two hours of film.


For the more purist of fans, while you will not be disappointed with how closely if follows the book, you might notice the 'toning down' of certain scenes. All the infamous aspects are still there, but the bruising and bleeding have definitely been toned down. Here is where the controversy begins. 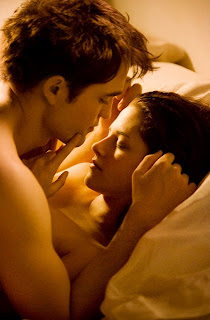 Firstly, the dreaded S word - *whispers* SEX *covers mouth with fingers*. After much snogging and fretting (making out and worrying), Bella and Edward actually get a taste of the good stuff. However, this is very tastefully done both in the book and in the movie. In the film you actually get to see a lot more than in the book, but that mainly involves a few shots of Robert Pattinson's back. That's it.


Here is something I must make clear: there isn't actually a sex scene in the book. It's not described in detail. They talk, kiss, it is apparent that it is what is going to happen and then... they wake up the next morning. Not to mention that Meyer ticks some serious boxes by making them both 18 and married. They are also both virgins on their honeymoon, which at this day and age, is becoming more and more unlikely.


So where is the controversy and rough sex accusation coming from? Well... Edward breaks the bed... And Bella wakes up covered in bruises. The film only brushes over the latest, but according to the book, she is literally covered in finger and palm marks.


Before your mind sinks deeper into the gutter, here is my point - and I am saying this as an aspiring writer: Edward is described as being super strong and as solid as marble throughout the entire series, which is reinforced by the fact that his biggest fear is to accidentally hurt Bella when he's not paying enough attention. And here comes the punch line, what would happen if you fell asleep on the floor using a stone for a pillow? You would wake up with back pain and a stiff neck. So... How on earth would you sleep with a super strong vampire and wake up as if you slept with a human? As far as fiction goes... Not plausible. The fact she wakes up bruised makes perfect sense to the plot. It is not so much to do with what happened, but with the fact Edward isn't human and it highlights the difference in between them.


Round two of controversy comes with the graphic details of the birth scene. Yes, I think by the trailer you can guess Bella gets pregnant. In the book this scene is really graphic but, again from a writing point of view, it has to be. She's giving birth to a baby that isn't human. And, according to the plot, the mothers of vampire children die at birth. But don't worry; although this is still a strong scene, it has also been toned down for the movie. They concentrated in making it very emotional rather than graphic.


And last but not least, Jakes connection with the baby. Ok, admittedly a little freaky. But I can almost see what Meyer was trying to do. Jake is the good guy with a larger than life personality that is about to end heart broken when the love of his life sales into the distance in the arms of someone else. What is the point of having a fairytale if the good guy doesn't get his happy ending? So she gave him the closest thing to his loved one: her daughter. Who looks like her and isn't human just like he isn't. The fact that his connection to her is what saves her life doesn't do any harm either.

Ok. Fair enough... That is still a little weird.


All in one? A good movie. Kristen Stewart surely does a good job and so does Billy Burke, who plays Charlie - Bella's father. The final scene is also something to watch. Just ignore the cheesy score soundtrack in some scenes.


OUT OF CURIOSITY: Edward and Bella go to Brazil on their honeymoon and Robert Pattinson speaks a little Brazilian Portuguese in this movie. I have to say his language coach did a great job at making him lose most of his accent. While he still has one, it is definitely enduring. :-) It was also nice to see Brazil portrayed properly for a change. The earlier reference to it in New Moon (the scene where Edward thinks Bella is dead) was rubbish. Oh! There is also something interesting happening with the house where they filmed the honeymoon scenes read about it here. Writer Stephanie Meyer has also announce on MTV that she intends to finish Midnight Sun, Twilight on Edward's point of view. When the partial draft leaked on the internet a couple of years ago she declared she would not finish the book, but has now, apparently, changed her mind. Read the draft here.