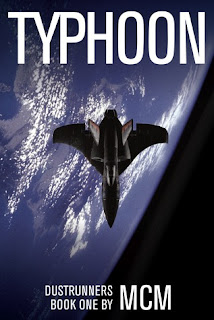 Typhoon was written in three days as part of a livewriting project. The question is: did it work?

SYNOPSIS:
Kani isn’t Tundra. Tundra is a dustrunner: a ruthless space pirate, flying dangerous missions in low Earth orbit. Kani is just a regular teenager and she wants absolutely nothing to do with that. Unfortunately, she has no choice. Thrown into a world of deception and betrayal, Kani must fight to keep herself alive as she’s hunted by law enforcement, spies, mobsters, and even her so-called teammates, none of whom want to see her survive another day. All she needs to do is make one fatal mistake: tell them who she really is. (Goodreads)

REVIEW:
Livewriting, as the name itself hints, it is a method of writing live allowing people online to watch your work develop. In this case, it was also writing with the help of a good number of people making suggestions.
When I won this book on a giveaway over at Brazilian Book Worm I was thrilled! Conspiracies, affairs, spy stuff, space crafts, money, even a sick little girl... Name it; it had it all! And in that respect Typhoon did not disappoint. It is indeed a fast paced thriller, action packed to the rim.
The plot is intriguing, the characters very interesting and you are dropped right in the middle of the action. What else could you ask for? Well... In my case? An explanation. To be fair, MCM does give one at the end of the Smashwords edition I read, but as much as I love to start a book with a bang, when this happens the author usually has to find a way to explain to the readers as they read along how they got there in the first place.  And that is exactly where this book let me down.
Typhoon is set in the future where space is a conquered limit and human race has resorted to mining in other planets. I know. The first word that comes to mind is Avatar, but this is different. It doesn't concentrate in the planet the goods have been mined from, but on the pilots that fly it home. Our heroine, Kani - a.k.a. Tundra (her pilot name, and for the record, I love it!), accidentally becomes one of them to save the life of her friend Stacey - the real Tundra.
The prose is smooth and bounces back and forth in time and in between the characters, which gives the narrative a really interesting aspect. Nonetheless, you still end up only knowing snippets about the characters and the world they live in. When an author creates a world that is different or far removed from our current reality, he or she must explain to the readers the rules and boundaries of that world. Without the added end notes, that doesn't really happen in Typhoon. As a matter of fact, I kind of wish I had read the notes before reading the book.
And then you have the little details: Kaso, who is hilarious and comes out with the best lines, is quite taken by Kani but you don't really know why he's going out of his way to help her. Her boyfriend Simon appears out of nowhere and leaves just as quickly. Then there is the mob... Which strangely enough only has two members and the patience of Mother Theresa. Add a not-quite-one-but-almost-one affair which develops out of a four meetings over four years; a wife and son who died tragically causing massive guilt on one of the pilots, but you don't know why or how; and a heroine who seems to know how to fly a plane even though she has never done it before as well as having the amazing ability to find unknown passwords on her friend's phone while she's mid-way through a space battle. Yeap... That was when it lost me.
If you are willing to only concentrate in the action and the thriller side of it, you will love this book. If, like me, you always want to know 'how you got to this point', you might not. Having said all that, for a book written in three days, this has some awesome characters and is really entertaining.
TEASER: A couple of lines from Kaso:
pg 103:
'"Who is this?” he snapped.
“This is Kaso. Who is this?”
Fantoni seemed genuinely put off the insolence of this fool on the phone. He stood a bit taller, grunted as he spoke. “It’s Augusto Fantoni. How did you get this number?”
“Listen, Fat Tony,” said Kaso, completely ignoring him.
pg. 135:

"...You sure you don’t have the number? Anywhere? You wrote it down, stuck it in your underwear? Here, use the phone’s camera and I’ll take a look.”
“In your dreams,” she [Kani] said.
“You can see my dreams? Oh, this is awkward. I should explain about the suspenders…”
Book Rating: **
To check the rating system click here.