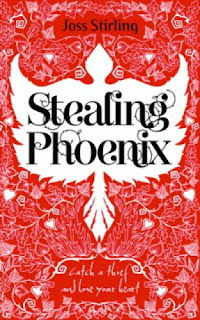 Earlier this summer I received an ARC copy of Stealing Phoenix, the second book by British author Joss Stirling due to be launched on September 1st (read about it here) by Oxford University Press. My question was: was it going to be as good as the first book?

SYNOPSIS:
"The notion that there is a soulmate out there for every person with a paranormal gift is mere myth is Phoenix's world. Phoenix was raised within the Community - a gang of thieves with paranormal powers - under the control of a harsh master known as the Seer. Leaving the Community is unheard of. But when the Seer gives Phoenix details of her next target, Yves Benedict, she soon realises that he is much more than just her next victim. Yves is her destiny. To be with him, she must break away from the Community, but resistance against the Seer puts them both in mortal danger. Phoenix has never trusted anyone before, now it is time to trust Yves with her life."
REVIEW:
Finding Sky, originally the one and only book in this series, was great fun to read (read my review here) so the bar was set quite high for Stealing Phoenix. Well... I was not disappointed. It's not as good as the first book, it is better.
The plot is interesting and solid. Even though it is fast paced - all the events happen within a week, give or take - the story is still convincing and entertaining. True to Stirling's style, the prose is smooth and flows nicely. While the original characters we already know and love remain true to the first book, the new ones are equally interesting and there are plenty of scenes with entertainment value. The villains are also tougher.
Even though she ended the book with a lot of closure and no cliffhanger, Stirling managed to do so without closing the door in the series. I know this is easier in her case as she only has to pick another Benedict brother to talk about; nevertheless, she managed to do it well. I, for one, hope she talks about Victor next. Bless him! I think he deserves to find his woman. That, however, would present challenges of its own since Victor is one of the older brothers and it might take the books on a different direction.
What I enjoyed the most about Stealing Phoenix, though, was the gentleness and innocence of the romance. I read a lot of YA books and sometimes there isn't enough romance; other times, for my sadness, it verges on soft porn. Now, I am all for a good snogging scene (in good American - making out scene) and a nice dose of physical loving, but when that becomes the most important aspect of a YA book I find it quite disturbing. It was great to see, or rather - read, that Stirling managed to give Stealing Phoenix a good amount of teen hormones and drama without making it sound cheesy or over the top. By default that highlighted the plot, the situation the characters found themselves in and their feelings for one another. Just so we are clear and there is no doubt: there is plenty of kissing going on in this book.
Another detail I really like about this series is the fact that they are normal people. Ok, maybe not that normal. But after reading about vampires, werewolves, angels and what-nots it is quite a refreshing change to read about humans who do not transform into something else. Please do not take this comment as me saying I don't like paranormal or mysterious creatures. My other favourite novels are about angels, fairies and werewolves. What I am saying is that it is a nice change to read about humans in a paranormal novel as it makes it believable. The very possibility that people with a sixth sense really exist give this story a certain level of reality or probability.
While it is better to read Finding Sky before you read Stealing Phoenix just because it introduces you to all the seven brothers with a little more depth, it is not essential. You could still understand the story without having read the first book. They are not so much a series as they are companion books, if that makes sense.
OUT OF CURIOSITY: I interviewed Joss Stirling a couple of months ago. Read the interview here. The paper copy of this book is also for sale at Waterstones at a discounted price and you might be able receive it before the 1st of September depending of the type of postage you choose and when you order.