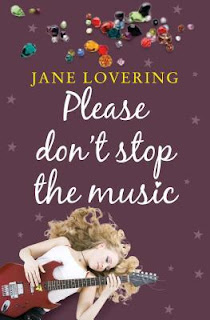 A romantic comedy with some teeth that will have you coming back to it over and over again.
SYNOPSIS
How much can you hide? Jemima Hutton is determined to build a successful new life and keep her past a dark secret. Trouble is, her jewellery business looks set to fail. Until the enigmatic Ben Davies offers to stock her handmade belt buckles in his guitar shop and things start looking up, on all fronts.
But Ben has secrets of his own. When Jemima finds out he used to be the front man of a hugely successful Indie rock band - Willow Down - she wants to know more. Why he desert the band on their US tour? Why is he now a semi-recluse?And the curiosity is mutual - which means her own secrets are no longer safe.
REVIEW:
Although she has a series of novels published in the US, Please Don't Stop the Music is Jane Lovering 's first novel in the UK. I have to admit I wasn't very fond of the title and I didn't expect great things from this book. Granted, this is a little shallow of me but, in my defense, I have never heard of the author or her work so first impressions were key here and I normally stay away from long titles. Don't ask me why.
Anyway... Please Don't Stop the Music was recommended to me by a colleague, the blurb sounded intriguing (nothing like a tormented guy to spark a girl's interest) and I found out it had been short-listed for Romantic Comedy of 2012 in the ongoing Romantic Novelists' Association Award, so why not? And what a surprise, I tell you! I read this book in one day. I just couldn't put it down! And after that I kept coming back to it over and over for a period of a few days. The love story definitely struck a chord with me (no pan intended) and engraved itself in my memory.
The characters are enticing and easy to relate to. The suspense, enough to keep you curious throughout - you don't really figure out the secret until Lovering wants you to. Even though, once you understand what it is, you can see all the little hints she gives throughout the book. The prose is smooth and engaging.
If you're wondering, there are problems with this book. The background stories don't quite flow as nicely as the primary one, even though the characters themselves are well defined. So the resolution for the drama going on in the background is a tad unrealistic. If I was Saskia, knowing that my husband got some other woman pregnant on a one-nighter rather than a long-term affair, wouldn't make it any easier for me to swallow the fact that he did. I'm not sure the romance in between Rosie and Jason, Jemima's best friends, is well defined either. You can see there is something going on, but it seems superficial and one-sided rather than of any real meaning. Surely, much less serious than you find out by the end. I'm also not convinced by the comedy aspect of this novel. It's almost like Lovering is trying too hard to be funny.
Having said all that, you get so caught up in the love story in between the two protagonists that you don't really care that the home straight has a kink on it or that some explanations are not as good. All you want to know is what will happen to our two love birds. Their romance unfolds in such a nice pace, you are literally on your tip toes every time they stand close to each other.
Now, this is an adult romantic comedy and you get some swearing and some seriously hot scenes, so not appropriate for under 16s, but brilliant nonetheless.
OUT OF CURIOSITY: As of today, you can buy Please Dont' Stop the Music on Kindle format over at Amazon for £0.72 (click here to see offer). Bargain!