Movie Review - We Bought a Zoo 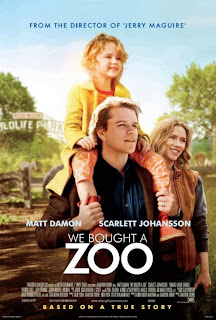 Based on the memoirs of Benjamin Mee, We Bought a Zoo is not only a film adaptation, but it's also based on a true story.

After he loses the love of his life, his wife Katherine, and his teenage son takes his anger off on school and gets expelled, Benjamin decides to move somewhere new and start over. Unfortunately, the house he falls in love with comes with 200 pets.

While based on the book, the movie is very different from the novel. For starters the original story happens in England, not America. Dartmoor Zoo and the Mee family are indeed real people and a now functioning attraction (you can support the project and find out more about it here). And to finish it off, not accounting for anything in between, they buy the zoo before his wife dies.

Once you put that aside, however, it's hard not to be touched by such an extraordinary story. I have to admit I cried all the way through. Sad, extremely embarrassing, but true. Passed the thorny layers, I'm truly a marshmallow. Who knew?

So even though the movie doesn't follow the book to the letter, I still think We Bought a Zoo made it s book justice. Enough to make me want to go and read it. So I'm adding it to my to-read list.

BOOK SYNOPSIS
"We Bought a Zoo is about one young family [...] and the wild animals that changed their lives forever. When Ben [played by Damon] and his wife Katherine sold their small flat in Primrose Hill, upped sticks with their children and invested their savings into a dilapidated zoo on the edge of Dartmoor, they were prepared for a challenge and a momentous change in all their lives. With over 200 exotic animals to care for - including an African lion, a wolf pack, a Brazilian tapir and a jaguar - Ben's hands, and those of his family and tiny team of keepers, were full. What they weren't prepared for was Katherine's devastating second brain cancer diagnosis. Ben found himself juggling the daunting responsibilities of managing the park's staff and finances, while holding the bailiffs at bay and caring for his wife. A moving and entertaining story of courage and a family's attempts to rebuild a zoo, and carry on after Katherine's tragic death." (Waterstones)