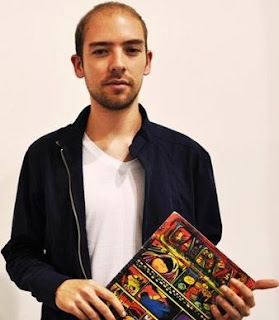 So what do you do if your favourite art form is not recognized in your country? According to Daniel Jimenez Quiroz, you work to change it.

I met Daniel when he gave a very inspiring talk at London Book Fair earlier this year (related article here) on how comic books are not considered a respectful genre or art form in his home country, Colombia. And how he and a group of his friends had started a project back in 2006 to spark a revolution. He caught my attention when he quoted: "Basically, in Colombia, being a comic art magazine editor, I'm either considered to have a low IQ or work in pornography."

Larva Magazine (Revista Larva) started online, as a blog, to showcase the work of comic artists in Colombia. Today, it is one of the most influential publications of its genre in South America, showcasing not only the work of national artists, but also international ones. Collaborators include Shaun Tan, who won an Oscar for Best Animated Short Film in 2011, and Peter Bagge, a key player in the revolution of American comics during the 90s.

By default, Larva is also responsible for the creation of Editorial Robot - the publisher behind the four annual paper issues of the magazine and other comic related books and periodicals; and Entrevinetas - a festival dedicated to graphic novels and comics. This year, Jimenez was awarded the YCE (Young Creative Entrepreneur) Publishing Award by the British Council recognizing their efforts to change the world of comic books in South America.

I had the pleasure of having a very brief chat to Daniel and here is what he told me.

1. How did the project start? Where did the idea come from?

It started in October 2006 as a project of a group of friends in our local University in Armenia, Colombia. Two of us were comic artists and wanted a place to publish their work, but in Colombia there were no magazines or publishing houses specialized in comics, so it was a difficult thing to do. Especially because the comics are seen as a minor art (more then than now!) and the literary establishments with the few cultural magazines were never interested in comics.

So I proposed to them that we started our own. A publication to edit those works. It started as a fanzine, but it quickly began to draw more attention from the public and the general media. Suddenly, we discovered more authors and artists from other cities in Colombia and the magazine began to grow. Then we started to look around, and we found a wealth of creators (amazingly talented!) in other South American countries.

Today we are one of the most important publications of its kind in South America and we bring together leading cartoonists from around the world. With curiosity and daring, the magazine has grown. It has been quite a journey!

2. Is that a reason why you picked the name 'Larva'?

Not the most captivating story, really. 'Larva' relates to a caterpillar or larvae. It's because from the very beginning the project was thought of as an idea in constant growth, in a constant state of creation, like in a metamorphosis or mutant state that allows you to reinvent formats and content at every moment. The more mature space, there's no doubt, is Robot. There we seek for more ambitious projects and better editorial quality.

3. During your talk at the London Book Fair you mentioned that comic books are misunderstood in Colombia, how so?

Well, with the exception of a few countries in the world (France, Belgium, Japan...), comic art is seen as a lower art form by the mainstream media and the cultural elite. So people, guided by those ideas, tend to think of comic as a minor form of creativity. Something for children or unintelligent readers.

On top of that, in Colombia the media and part of its readers seem to think that comics are unable to tell great stories, even though we have done much to change it, and we have - through reviews, events and major festivals - brought to light the names or great authors from all over the world.

Also, at legal level, in Colombia there is a law that discriminates comics. Originally, that law - called 'The 1993 Book Law', was created to democratize books with tax benefits and state support, but one of its articles says that the comic is not a cultural form and puts it at the same level of pornography or esoteric publications. That means comic books have no legal benefits in Colombia and their distribution can be quite complicated. Beyond that, this is an outdated law that sends a very wrong message, a moralized one, to people who are just beginning to get interested in comics.

4. What do you look for in comic art or narratives? What makes them good enough to be selected by Larva or Robot?

We believe that our project is inspired by the best creativity, by talent. We started with the aim to provide an independent platform for graphic art and independent voices in the comic art world of Colombia and abroad. So we have always looked to become a publishing house - a small one, yes, but with an established criterion: to deliver high quality in book design and original creative content.

We are interested and inspired by the work of the best artists and illustrators in Colombia, Latin America and the rest of the world. Doesn't matter if they have recently graduated or are expert authors or veterans in the art form. We publish books in partnership with the author, with the respect for their work in mind, and we do everything in our power to ensure that they look good but, above all, have great storytelling.

We are always on the lookout for original voices and an original approach to the comic media. We are interested in original drawing styles but also in an original way to approach a story. 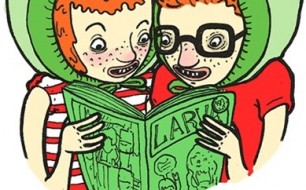 So there you are peeps. That goes to show what a very determined mind and a group of artistic friends can do! Who said a single person can't make a difference?

You can find out more about Larva, Robot and the Entrevinetas Festival by following the links on this page. You might need to have a little Spanish or use a translator, mind you. And you can get in touch with Daniel on Twitter and Facebook.