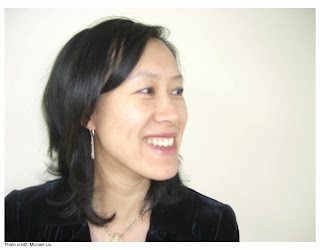 The Mercy books have become one of my favourite series and I have reviewed both Mercy and Exile (read it here).

With Muse, the third book, releasing on October 27th *jumps with excitement* I asked Rebecca Lim for an interview and she was not only up for it, but super nice and chatty. Here is what we got up to:

There are many books on fallen angels, but yours shines a completely different light on the subject. How did the idea of writing about them in this particular way came about?

Mercy came about through a combination of things.


I was researching an essay at uni when I came upon the classical idea that there are only three classes of sentient being under God: bestial, human and angelic. The idea stuck with me for years, because it seemed so black and white, but had so much potential to be upended and played with.


I’ve always been intrigued by the idea of “the fall” (whether of humans or of Lucifer and the angels that fell with him). There’s so little actual detail on fallen angels in the bible that there’s space to create, I guess. I didn’t just want Mercy to be a “bad” angel – so her back-story is slowly revealed over the course of the first 3 books.


The news is also a potent trigger for book ideas. The stuff people do to each other in real life is staggering. Mercy was a fictional response to some terrible abduction and imprisonment stories that were emerging around the time I was writing the novel.


I’m a big genre-masher when I read, and I kind of bring that to my writing as well. We live in a complicated world, and things will always bleed into other things. Life’s messy and often very dark, and I’ve tried to capture that in the Mercy novels. Hopefully those readers who like being engaged and challenged will come along for the entire ride – I wrote Mercy in the first person (mostly) present tense because I wanted the reader to be right there inside her head as she tries to figure out what the hell is going on around her. If you’re willing to go with it, it gives the storyline an immersive quality.


With Mercy I was hoping to reach YA readers and female readers generally because of some of the themes I cover. I wanted to create a female heroine who looks outwardly very weak, but who could actually dish out vengeance to her persecutors. Kind of an empowering revenge fantasy, I guess.


Do you believe in Angels?

I personally do, but I’m not going to try and force anyone to believe what I believe, so the books are more about a redemptive morality than seeking to push any kind of religious message. In writing the series, I’ve tried very hard to tread carefully when dealing with the subject of angels because they crop up across most major world faiths. They are part of our collective human subconscious – our shared dreaming, I suppose – and I wanted to create a set of angels who were more flawed and dangerous (and less fluffy and sweet) than what people might have seen before because to me, they embody absolute power.


Mercy finds herself living the lives of complete different people: a teen in a house where someone went missing, a girl who's mother is dying of cancer, a "disaster waiting to happen" super model... Where does the inspiration for these come from?


From out of my diseased imagination! All of the storylines are informed by the genres that I like to read, news stories, an expensive fash mag addiction … I get inspiration from a tonne of things. I’m the biggest eavesdropper. Just tuning in to the stuff that’s happening around me can fire up ideas.

You are currently finishing to write Fury. Every one of the Mercy books so far has finished in such a cliff hanger! Would my nails end up bitten to the quick at the end of Fury as well? Please tell me I won't cry!

Hopefully the end of Fury is completely satisfying, but I can’t promise that you won’t cry!


You were a lawyer before you were a writer. What happened that made you want to change careers?

I’d always wanted to be a writer – from about the time I was 7 – but like a lot of people, I had no idea where to start. School’s great for telling you exactly what you have to do to be a doctor, lawyer, scientist etc but it can only offer general pointers to people who want to be writers, video artists and other slightly left-field things.


Initially, it seemed possible to combine a career as a lawyer with a career as a writer, because at the end of the day you’re working with words and ideas. But I ended up in the kind of law firm where you risk having your car towed away at 6am because you’ve left it out on the street in front of the office all night. It was all-consuming. The novels I was writing in those days were falling short of the mark and my creative brain and legal brain were pulling in different directions, so I gave myself a couple of years off law to try and make a go of it, and I’m happy to say that I haven’t gone back (yet!).


Some people are talented and gutsy enough to just say, “Yep, I’m going to be a writer and nothing and no one is going to stand in my way”. Other people (like me) get the fall-back day job first, then tentatively work their way towards trying to be the person they were meant to be.


You have now over 10 books under your belt. How did getting published come about? Was it something that happened by chance or something you had to pursuit vigorously?

I was frantically trying to combine the writing thing with the lawyer thing and it wasn’t really working out on the writing side.


But then a publisher in Australia wrote me a letter out of the blue in relation to a manuscript I’d sent them (which hadn’t gotten past a certain level of judging in an open writing contest they were running). And they completely didn’t have to do that, but they gave me an excerpt out of the judge’s report and told me they thought I could actually write and that I should keep trying and maybe one day send them something else to look at. It was the biggest shot in the arm for me. It actually helped me believe it would be possible to get something published one day, and I will never forget that.


After I got that letter, I thought seriously about taking a break from being a lawyer and just giving myself time to write. And it was deeply scary for the first year or so, but I was lucky enough to get a series for middle readers published in Australia (that was also translated into French) and I’ve just forged on from there.

Most published writers will tell you that chance has very little to do with the process. It’s a lot of hard work and agonising. But it’s such a privilege to be able to do this, to reach out to people, to have them walk through a world that you’ve created.


Could I be cheeky and ask for an exclusive teaser from your upcoming book Muse?

Here’s the blurb for the Aussie version, hot off the presses: Mercy is an angel, exiled from heaven, and when she wakes in the body of nineteen-year-old Irina, Mercy discovers that she’s one of the world’s most infamous supermodels on the verge of a very public breakdown.

Against the glamorous background of Milan’s opulent fashion world, Mercy continues her increasingly desperate search for Ryan Daley, the mortal boy she remembers falling for in a past life. But, this time, Mercy’s memories and powers are growing ever stronger – and she begins to doubt the pleas of her dream lover, Luc, as more of her mysterious past is revealed by beings both celestial and demonic. Are Luc’s desires as selfless as her own or does he want her for a more terrifying purpose? The grand scale celestial battle for Mercy’s soul builds to an incredible stormy crescendo as archangels and demons clash in a cataclysmic showdown that not all will survive …

Now for the random but fun stuff...
Is there a song that makes you think of the series when you hear it?

Random stuff is the best stuff.

I had a lot of music running through my head as I was writing the books. These are just a handful of “mood-setters”:

· Standing outside a broken phone booth with money in my hand (Primitive Radio Gods) – with kind permission from the band, part of the lyrics appear at the front of Exile
· If this is it (Newton Faulkner)
· Who knew (P¡nk)
· Last day on earth (Kate Miller Heidke)
· Mozart’s Requiem
· Corpus Christi Carol (Benjamin Britten)


What is the item in your handbag you can not live without?

Baby wipes and hand sanitiser would have to be tied for first place. I have small kids (enough said!)

Strawberry, but not the cardboardy kind of strawberry you’d find in the Neopolitan icecream you get at the supermarket. You’d have to be able to see chunks of actual fruit in it …

Definitely the beach. There’s nothing like standing on the edge of a vast ocean to put everything back in perspective.


A cause worth fighting for...


The end to the trafficking, slavery and oppression of women and children. We were created equal, damn it.

I couldn't agree more with the last statement!!!!

As I mentioned before, Muse releases at the end of this month and both Amazon and Waterstones have a deal on pre-ordering it so check it out! Be prepared to bite your nails to the quick, though.