I have recently been asked to review a couple of books, so why not give you the heads up? 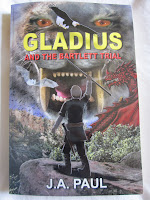 I am currently reading: Gladius and The Bartlett Trial by my lovely Twitter friend J. A. Paul. This coming of age-story is his first novel and here is a little taster for you:

"When fifteen year-old Gladius Oldmond is thrust from his peaceful home into the dangerous Longwood Forest he finds himself pitted against a tyrant who has been terrorizing the lands in search of answers to an ancient secret that could unlock absolute power. Along the way, Gladius has to fight for survival but he also makes new acquaintances and discover the true meaning of friendship, including Elle - the girl who captivates his heart. So can Gladius and friends solve the riddle of the ancient secret before the evil Mulhurt does? And if they can, will they be able to do anything about it?" Read more about it here.

Solid by Shelley Workinger is next on my list. Its sequel, Settling, is due for release on July 4th.  And here is what it is about:

"Eighteen years ago, a rogue Army doctor secretly experimented with a chromosomal drug on unknowing pregnant women. When he was killed not long after the children were born, any knowledge and evidence seemed to die with him - except the living, breathing, human products of his work. Almost two decades later, the newly self-proclaimed “open-book” military unearths the truth about the experiment, bringing Clio Kaid and the other affected teens to a state-of-the-art, isolated campus where they soon discover that C9x did indeed alter their chromosomes - its mutations presenting as super-human abilities. While exploring her own special ability, forging new friendships and embarking on first love, Clio also stumbles onto information indicating that the military may not have been entirely forthcoming with them and that all may not be as it seems…" Read more about it here.


And last but not least, comes a novel a little more grown up: Bad Spirits by author D. V. Berkom. Berkom has recently released the trailer the series and here it is: Read more about Bad Spirits here.


So... What is your first impression?