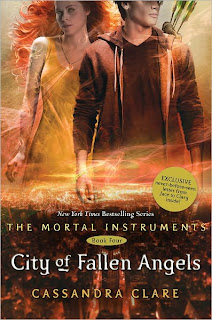 “The Mortal Instruments” was meant to be a trilogy but is now a six books series. “City of Fallen Angels” is its fourth book. Has it tainted the series or has it made it even better?
As you might have guessed, I am a big fan of this trilogy-becoming-saga. There is obviously a lot of research and work gone into these books and the thing that fascinates me the most about them is how Clare treads a very thin line in between many different religions, incorporating a series of different principals and beliefs from each one, without being offensive or supporting any of them in particular. That is a very hard balance to achieve.
SYNOPSIS:
For those who have never heard of it (shame on you!)... Basically, the story is about a group of demon hunters or Shadowhunters, as Clare calls them. In her books there is an entire world right under our noses that human eyes cannot see. A world filled of angels, fairies, demons, vampires, werewolves and other mystical beings. It is the Shadowhunters' job to keep the balance in between all of them and keep humanity in the dark as to their existence. Shadowhunters, in their turn, are humans chosen and blessed by an angel to protect humanity. The only problem, in the first three books, was that Clare Fray didn’t know she was one. She also didn’t know who her father really was and, combined, that created a whole lot of issues that threatened not only her feelings for Jace, a young Shadowhunter, but also their lives.
REVIEW:
Here is the thing: there is fantasy and there is possibility. Clare's plot is so water tight, I cannot fault it. She has an explanation for everything; giving you the feeling that whatever she is telling you is actually possible and not a fantasy. She would tell you there are cats raining from the sky and then she will explain how and why and you will think it is absolutely plausible. I am convinced that woman could sell ice to an Eskimo.
With three books preceding City of Fallen Angels it is hard to talk about it without giving the first three books away. So here is what I can say:
I have to admit that at the beginning I thought I was not going to like it. It always annoys me when something is obnoxiously good and, instead of enjoying its success and moving on, people try to milk it. We have all seen that happen many times before, very rarely with a good outcome. However, as the plot developed I was so engrossed in the story that towards the end I was really mad. "How stupid were they? The only person that was actually at risk got left behind with the bad guy, who wasn't alive nor dead (enough)!" I wanted to slap someone in the face! I contemplated throwing the book on the floor, and then I remembered it is a signed copy and thought better of it. "What on earth were they thinking? Seriously! Argh!!!" I am sure you get the gist. It all became a little personal. *shakes head in shame*
True to form, there is plenty of emotional drama, mystery, butt kicking, politics, demon slaying and snogging going on. (For my American followers, British snogging is the American equivalent of making out) However, that is not all. Through City of Fallen Angels a series of new characters are presented and a whole new romance emerges as well as old ones developing (yes, this was for the benefit of my fellow romance lovers). This is no longer just about Clare and Jace, but another three major romances and another two floating in the background. It was also very interesting to see and learn more about some of the original characters.
My verdict? It made it better and I am now looking forward to "City of Lost Souls", book five, which is scheduled for release in 2012. The same could be said for the movie adaptation of the first book, City of Bones, also out next year.
Book Rating: ****
To check the rating system click here.