Bookshop of The Month ~ Hatchards - The Oldest Bookshop in London

When my friend Maria Costa mentioned she visited Hatchards, the oldest bookshop in London, I just had to ask her for a guest post.
Maria is one of the three movers and shakers I made good friends with while in a writing course in London (Cristina & Angharad  I mean you too when I say three!). She's a primary school teacher as well as a talented freelance writer and blogger. I say it's a good job she's not a secondary school teacher! The boys wouldn't be able to concentrate. ^_^ Like what you read? Then visit her over at her blog: Me & Mr Brown.
Go Wilde At Hatchards
The Oldest Bookshop in London

In my literary experience I have noted – or subtly surmised – that there are two types of readers. Those who read to pass the time and those who are wholly fascinated by all of the incomparable worlds they can visit just by turning a single page.
I am palpably proud to say, that I fall in to the latter category. Just looking at my flourishing bookcase proffers ecstatic pleasure and I have often been known to reject a night out in order to paint a literary town red instead.

When I then discovered that Hatchards, the oldest book shop in London, was frequented by my literary idol, Oscar Wilde, I jumped at the chance – and on the London tube – to head down there pronto.
With freedom, books, flowers, and the moon, who could not be happy?

The antiquarian book shop lives on a quaint street in London’s Piccadilly, opposite Burlington Square and on the same street as Fortnum and Mason. (So if you fancy a tea after, you know where to go). With art and culture permeating the city, an air of wonder surrounds the store and with its black exterior and gold italicised writing, you are only too aware that this is no ordinary bookshop.
On entering, a feeling of being ‘amidst it all’ instantly enveloped me. Here I stood, in the oldest bookshop in not just London but the whole of the United Kingdom. Here is where Queen Charlotte, Disraeli, Wellington, Kipling, Wilde and Lord Byron once visited.
Here they stood.
The books appear to possess an ethereal aura and I was frightened of ruining them at first but alas, my love for the old things superseded any fear and I was soon delving in to F.Scott Fitzgerald’s New York adventures. I inhaled the pages, the ink inscribing itself as an indelible etch on my book loving mind. An entire hour passed without knowledge or awareness because that’s what happens when you imagine.
How can anyone even dream of forsaking all of this for an electronic reading device?
So who is the man behind this amazing world, I hear you cry? Overtly careful not to forget its founder, John Hatchard’s portrait lives delicately on the ornate staircase, where no doubt he looks upon his 1797 creation with pride.
“…A town isn't a town without a bookstore. It may call itself a town, but unless it's got a bookstore it knows it's not fooling a soul”
I envisaged how Hatchard first bought merchandise from Simon Vandenbergh, a controversial bookseller of the 18th century. What was his aim, I wonder? I hoped it was to
show Londoners that in this wonderful city where culture pervades through the very buildings older than America itself, the traditional paper book will never become obsolete. 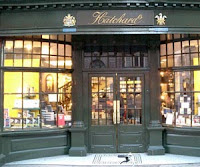 Not for as long as Hatchard’s is around.