Book Review - The Hunger But Mainly Death Games: A Parody 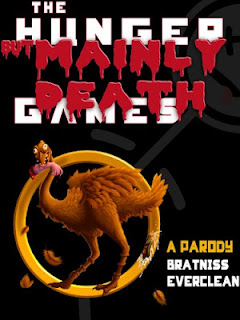 The Hunger Games has become a hit on paper and on the silver screen. Well... Not this version. :)

SYNOPSIS:
Mockstrich season has begun. Welcome to "The Hunger But Mainly Death Games," the hilarious Hunger Games parody, and the only book brave enough to suggest that Suzanne Collins's epic trilogy was way more about death than food. Or at least this is what Bratniss Everclean discovers, when she leaves the comforts of Slum 12, Pandumb’s garbage dump, to shortsightedly volunteer for a teenage death tournament. But she soon realizes there are fates worse than death…like weirdly having to date her fellow competitor, and lifelong stalker, Pita Malarkey. Okay, okay, it’s not worse than DEATH, but it’s still pretty annoying.


REVIEW:
This is going to sound really weird, but I actually don't know what to say about this book.

While I didn't mind the fact it was a parody, and there were some really clever remarks and wit here, there was also a lot of silliness. I was entertained by it up to a point, but then it became a little much for me. I definitely had too much of a good thing.

To be fair, if you like silly but sarcastic parodies like Little Britain for example, you will really enjoy this one. After reading it, I'm not so sure this genre is for me. Which is probably why I didn't enjoy this one as much I thought I would. Then again, that's exactly what happened when I went to watch Little Britain Live in Blackpool - it made realise I wasn't really that much of a fan.

Having said all this, some scenes are quite funny. So while I'm not being very generous with dishing out the stars, do bare in mind that this is my personal preference more than the fact the book isn't good.