Book Review - No One Knows You're Here by Rachel Howzell

A crime thriller that had me locking my doors and closing my curtains in paranoia. 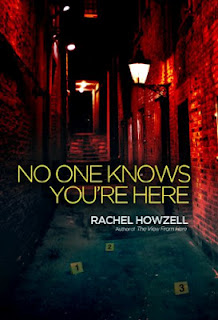 SYNOPSIS:
Three weeks out of cancer surgery, crime reporter Syeeda McKay is in the pursuit of Los Angeles’s most active serial killer. Over the last twenty years, the Phantom Slayer has hunted African-American prostitutes working in one of the worst parts of South Los Angeles, killing eight victims in the alleys off Western Avenue, and then disappearing into the shadows. But Syeeda doesn’t know that the killer has turned his sights on her. Detective Adam Sherwood, a hotshot investigator with the Robbery-Homicide Division of the LAPD, has been handed the Phantom Slayer cases, and together, he and Syeeda must figure out who is doing the killing... before Syeeda becomes his next victim.
REVIEW:
This book was brilliant!
No One Knows You're Here is obviously an adult book, but Howzell has written it with so much taste that none of the scenes, be them sex, autopsy or murder scenes, are overdone for the sake of giving too much detail. The characters were interesting, complicated and diverse. And the theme is definitely controversial.
Syeeda is a crime reporter and writer following the case of a serial killer. She is also romantically involved with the detective investigating the case and recovering from Breast Cancer. Everything takes a nasty turn when the killer, after years of going under the radar and not saying a word, starts not only killing again but also getting in touch with Syeeda.
I was on my tip-toes all the way through reading this novel. Rachel flips from our heroine's point of view to the serial killer's in the odd occasion. But she does it just enough that nothing is really given away while still keeping the killers narrative quite convincing and his madness and distorted ideas very clear.
The only reason this book didn't receive five stars from me was the ending. No, it's not a bad ending. But I would like to have seen more. It builds and builds and then it just unfolds in a blink of an eye. I almost felt like the story ended abruptly, as if a chapter was missing. How did they get there? What did the detective wanted to say? Still a really good plot, though.
Needless to say, if there is a sequel to this novel, I'm reading it.
OUT OF CURIOSITY: Rachel Howzell wanted to raise awareness to the fact that some serial killers get away with murdering so many people because they target people at risk: poor minorities, runaways, addicts, prostitutes etc... In short, people at the far edges of society. So even when there is a family begging for justice, justice never comes to them. If you read this book, do take a minute to read Rachel's notes at the back of it regarding this issue. It's very interesting and heartbreaking.
BOOK RATING:

Labels: Book Reviews, No One Knows You're Here, Rachel Howzell