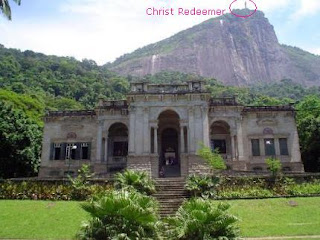 Ready to close our Brazilian Carnival special with a golden key?
I don't have green fingers and, apart from Orchids, I don't usually bother with leafy greens unless they are going on my plate. But the Rio de Janeiro Botanical Gardens are just amazing! The kind of place you have to visit in order to believe how beautiful it is.
It was created in 1808 by the Prince Regent of Portugal, John VI, who fled to Brazil after Napoleon invaded Portugal. Since it opened to the public in 1822, the Botanical Gardens have been visited by thousands of people including our current Queen and Albert Einstein. Apparently, Einstein was so besotted by the giant trees that he hugged and kissed one of them! And when I say they're giants, I’m not exaggerating. If they were hallow, you would be able to live in them! I'm thinking 'Avatar'.
Moving on... The first time I went, I made the mistake of going in the afternoon and thinking it would take me only a couple of hours. I should've read the memo. The place is huge! So make sure you allow most of the day to have a good walk around. If you're in a hurry or have a limited amount of time, consider taking a car tour. I would also advice anyone coming from a cooler part of the world to go in the morning and take a bottle of water per person as well as wearing comfortable shoes and clothes – it gets pretty hot later in the day and you will  be walking for a bit. A hat and some sun cream may be a good idea if you are really fair.

Another thing you might want to consider is the weather. The Botanical Gardens are set at the foot of the Corcovado Mountain - the one with the Christ Redeemer at the top – and the trip is even more memorable if you can steal a glance of the statue here and there. To achieve this you must avoid cloudy days. The mountain is high enough to disappear into the mist, hiding the Christ from view.
Children under seven have free entry and there is a plenty to keep them interested - including carnivore plants, Toucans and monkeys! But beware of the monkeys, though. They are used to visitors and have no fear of getting too close; if you're not careful, they will raid your bags and steal your ice-cream. 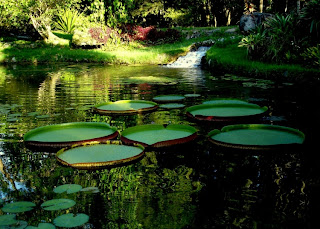 Mind the children, especially smaller ones. There are a series of ponds and places to get lost. Only 40% of the Gardens are actually manicured, the rest is still Atlantic Forest so if a little explorer goes wondering it might be awhile before he or she is found. Talk about a holiday spoiler!
For gardening lovers, check out the Orchid, bromeliads and cacti houses as well as the ponds and the Japanese Garden. The Orchidarium is the second largest in the world and the Water Lilies are big enough for you to sit on them. There are also guides that tell you which plants are flowering. You can pick up a copy and go flower spotting - not only fun for the adults but for the kids too.
For the Brits dropping by, don't forget to pay your respects to the black iron fountain by the double line of palm trees. It was made in Derby, England, believe it or not! No, you don't need to sing the national anthem when you see it. That would be weird. ^_^
OUT OF CURIOSITY: Did you know Rio was the only European capital outside Europe? When John VI fled to Brazil he proclaimed Rio de Janeiro the capital of the Portuguese Empire for the length of his stay. 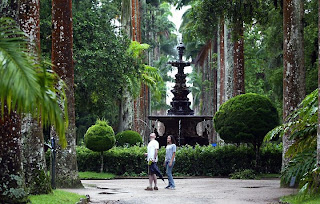