So how do you kill some time when you're fourteen years old? According to Alex Smith, you write your first book. 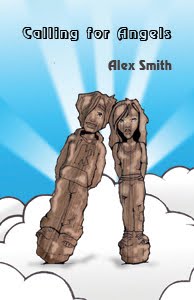 SYNOPSIS:
“Em never believed in angels. That was until she met Zak and Kai…
At home, she’s looking after her grandmother, who is slowly deteriorating, whilst despairing at her normally sensible brother, who is going off the rails just to fit in with the ‘right crowd’. Even Zak’s unexpected attention causes jealous girls to shower Em with spite – not least her best friend Caitlyn. If only she had a guardian angel…
Then a second boy steps into Em’s life. Dark,  brooding and captive to the secrets of a past he’d rather forget,  Kai not only appeared as if from nowhere and fallen head over heels for Em, but he’s also  the exact opposite to Zak.  And although he may not seem like it, Kai might just be the real thing…” (Goodreads)

REVIEW:
Those consumed by jealousy please raise their hands. Alex Smith is now a sixteen years old girl who has just had her first short story published by The Read Telephone. The same story she wrote when she was fourteen. Yes, I'm seriously jealous and I won't deny it. I wish that at fourteen I had that conviction and had known my passion was in writing. That sure would have made my career path a lot smoother.
Calling for Angels is a lovely and fast-paced short story and it showcases the talent of a very young writer. If this is what she can do at fourteen, I can't wait to find out what she will do with a little more experience. Very promising indeed.
The story is told from Em's point of view and the prose is really smooth. It's quite interesting to see the perspective of a fourteen years-old told by a fourteen years-old rather than an adult writer. You can definitely spot the difference in attitude or the importance given to certain issues or events. I don't say this in a bad way. If anything, it makes the book more realistic and, I am sure, very easy for other teens to connect to.
The characters are likeable and well defined, but unfortunately you don't get to discover much about Kai. Even after the book ends he's still a huge unknown and the timing around him seems off - the events happening too quickly or out of the blue to be really convincing, like the event that explain the picture on the cover of the book or the fact he's in love with Em. Having said that, this can usually be a flaw short-stories have in common. Because of the fast pace you don't always get to find out the details and for people like me, who like to see some logic and order throughout the events in a story, that can be really disorientating.
Nevertheless, the twist at the end is quite something and it will make you cry. A very interesting start for a very promising young writer. Well done Alex!
Book Rating: ****
To check the rating system click here.