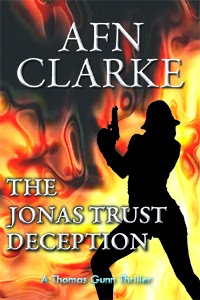 Conspiracy, romance, the mafia, politics, money, sex and Hollywood, The Jonas Trust Deception has it all. And let's not forget an overdose of action with the required hell of bullets and bodies.

SYNOPSIS:
"Thomas Gunn is ex-British Special Forces with a talent for infiltration and assassination. Skills that year ago he reluctantly called on, to expose an international conspiracy that led to the murder of his father and death of his best friend. He thought it was all behind him. But a desperate call from his journalist friend Morgan, propels him into an even more sinister plot that threatens global politics and the security of the United States. Racing to follow her cryptic clues, Thomas and his partner Julie are thrown into the deadly path of Mexican drug cartels, corrupt politicians, the CIA, FBI, MI5, and ruthless Wall St brokers."

This is my first book review after a long while of not being able to finish a book, so please bear with me, for I'm a little rusty. :(

The story starts very serene, but beneath the quiet there is a sense that something bad is about to happen. There is a crystal sharp edge to main character that sets you on edge. Murder, mystery and a complicated plot you need to have your wits about you to get the hang of what is going on, I thought I would enjoy this book because I love when the action grabs you from the word go, but it took me months to read it, which is usually an indication that I wasn't really into it.

If you like movies like Inception, The Bourne Identity and books like The Da Vinci Code, plots you need to gather the pieces of the puzzle together, you might enjoy the conspiracy storyline of The Jonas Trust Deception. While I lost the tread two thirds of the way in, I was really fond of AFN Clarke's characters; especially Julie who, with all her limitations, being partially death, could still kick some serious arse when it came down to it.

Written in first person, you are only allowed the see the cards the main character sees and he even keeps his own thoughts and plans from you (the reader), so your paranoia is at an all-time high throughout reading this book. I felt the characters were well defined, even though some of them came into the plot only to die very quickly of a somewhat gruesome death. And involving an ex-Special Forces, you get your fair share of the throat-slashing, gun shooting compulsory action that makes him look like a ninja.

But the devil with this book definitely lies in the details. Here is when you sometimes see the difference in between an indie book and a publisher edited one. While the plot is very interesting, the characters are good and the writing is smooth, this is the type of storyline that is not forgiving of loose ends. Every detail has to be watertight; otherwise, the reader is left confused. And boy was I confused! Editing mishaps had me questioning the name of a particular character and, at some point, I thought he was two different people! And from the moment the inconsistencies became too regular for me, I lost interest, hence why it took me so long to read this book.

In terms of originality... This is your box standard one well-equipped man against the world scenario. Hey! I'm not ditching it!! It seems to work only too well for James Bond! But I have to say that some of the details, like with 007, stretch the limits of the believable a little too far for me. Then again, I'm no Royal Marine. And having said all that, AFN Clarke does a great job of transporting you to a hot day, drinking exotic beer on a boat. Some of his locations and sceneries are quite jaw dropping and he does a great job at describing them to the point that you get the picture, but it's not too descriptive. All I kept thinking while I read this book is that I wanted to have a boat and go on holiday. Perhaps not the most sympathetic when somebody is about to have their throat slashed by an unknown evil. o_0

Despite not having enjoyed this book myself, if you have your wits a little more gathered than me, I think you will enjoy it. My conclusion was that, at this particular moment in time, I wasn't looking for a book I had to work hard to read. So not for the faint-hearted, but definitely for the brave and witty.

You can find out more about the Thomas Gunn thrillers here and buy The Jonas Trust Deception here.